March Winds and
April Showers
Bring forth
May flowers

March is often illustrated on US calendars with kites. So why not look at some government publications featuring kites!

The Library of Congress publication Folklife Today has and article on the origins of kites: "Kites Rise on the Wind: The Origin of Kites" by Stephanie Hall, March 16, 2017

With military and weather use, some balloons were considered kites, and some kites were in same groupings as balloons. Search the National Archives (NARA) and the National Weather Service to find information about this (especially the included link on the history of upper-air observations). With advancements in aircraft and satellites, use of kites for observations declined significantly.

We often think of kite flying as an recreational activity - not a protest movement.

1892 District Code prohibited kite flying in Washington, D.C. and Georgetown. In 1970 people protested the law by flying kites at the Washington Monument. Eventually the law was changed.

The Folklife Today article discusses some of the older examples of kites used for fishing.

There are many examples of kites being used in the study of weather. Nature has an article on the start of the program (see link below). Kites were to be used to record atmospheric conditions by automatic devices at set altitude. Plans to create synchronous daily charts of observations were adjusted early in the project - as variations in wind conditions impacted the various sites. And yet, the data gathered increased knowledge in this field of study.

There are so many articles on kites published in early volumes of Monthly Weather Review, that we can only highlight a few and include a link to NOAA Central Library's online archive.

There are several lesson plans that involve kites. Here are a few - some with instructions to build your own kite.

Stuck in an Airport?

Stuck in an Airport? Highway Shut Down?

Here is a gem from the U.S. Army that was on Best.Titles.Ever. If it's good enough for the soldiers...

Updated and Reissued as: War, Recreation and Morale, Informal Games for Soldiers, US Department of the Army, 1976

How to Keep From Getting Bored

If you are one of the many people caught in the December 2021 - January 2022 holiday air travel debacle - you might need a little distraction.

Why not spread good cheer with others stuck in airports across the U.S.A.?

Chapter I opens with:

"The principal factor in successful game leadership is an energetic, dynamic, enthusiastic leader. Games, if they are to be successful, must be carried on in a continuously snappy, vigorous manner. Whether or not the activities are conducted in this way is dependent upon the leader. The play group will invariably reflect his attitude whether it be enthusiastic or apathetic. Enthusiasm is contagious but the players cannot catch it unless it is present. A hustling, energetic, aggressive spirit on the part of the leader is the first requirement for effective game leadership. Confidence is another essential of successful game leadership. The lack of confidence on the part of the play leader creates indecision and hesitation which are fatal."

Be a good game leader - to avoid fatalities.

Best.Titles.Ever. highlights one of the BEST games to try. So here are a few more. 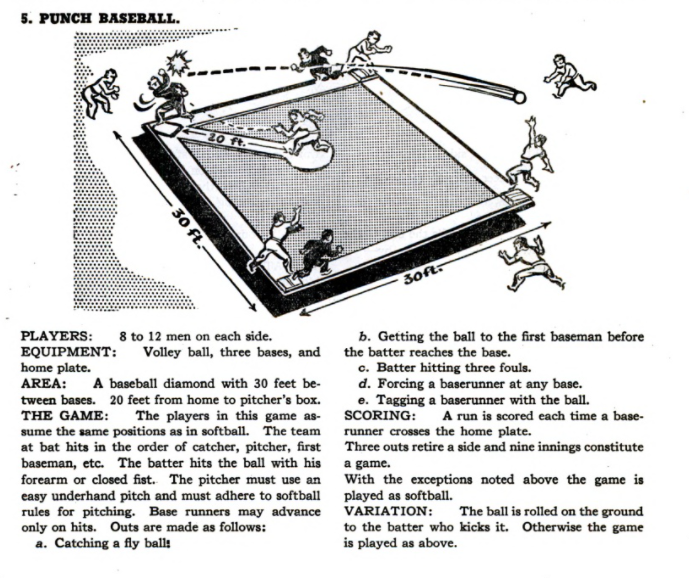 No bats required - so TSA won't confiscate your equipment bag.

Rather than use a volleyball, try crumpled paper - perhaps your travel itinerary?

Just be careful what gets punched.

Sometimes you need to improvise - especially when equipment is lacking.

Try stacking everyone's luggage up to 10 feet. Then place an empty suitcase on top.

These might be acceptable in an airport. Should keep you warm while waiting for highway to open. 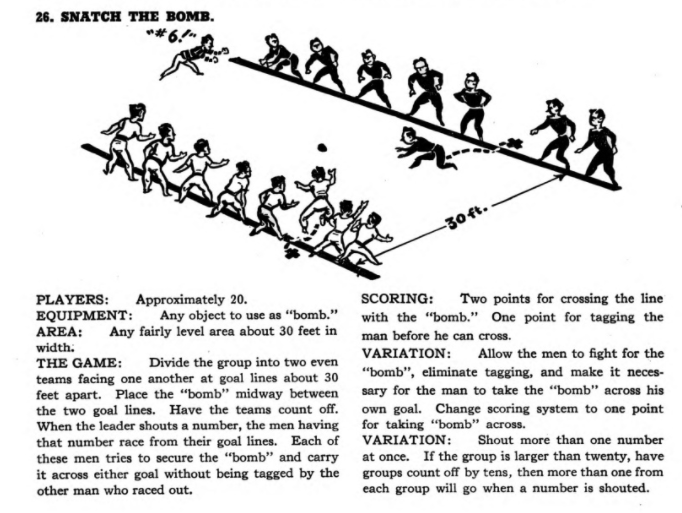 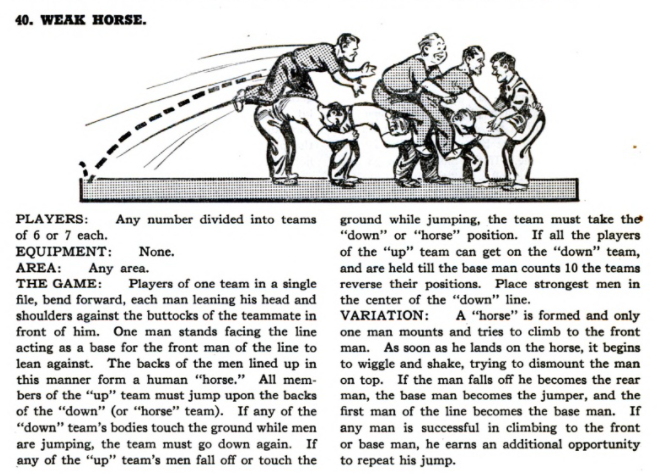 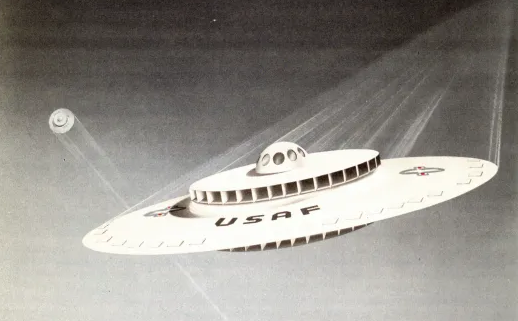 A look at unidentified flying objects, (UFOs) and the government

The report Preliminary Assessment: Unidentified Aerial Phenomena was submitted to Congress on June 25th. This is not the first report of its kind and probably won’t be the last. How did we get here?

The FBI and the National Investigations Committee On Aerial Phenomena

Government interest in UFOs gates back to at least 1947 when the FBI was collecting information on the National Investigations Committee On Aerial Phenomena. NICAP was an organization that pushed for congressional investigations of UFOs. They published reports including The UFO evidence, by Richard H. Hall,  1964 which stated “This report is an attempt to clarify the reliable evidence of UFOs, and to remove the fog mysticism and crackpotism which has helped obscure the real issues.” - National Investigations Committee On Aerial Phenomena.

Their efforts payed of with members of congress taking up the issue:

“Again and again officials pooh-pooh the sightings or the stories. Yet the National Investigating Committee on Aerial Phenomena -NICAP- has accumulated a book of sightings going back more than a decade reporting many instances of dual pilot corroboration by radar and otherwise. The most recent reported instance of UFO's was that in Colorado last week in connection with the carcass of a horse from which the brain cavity had reportedly been emptied.” Investigation of Unidentified Flying Objects- 1967 Con. Rec. 10/16/1967, 28949

The FBI Vault has newspaper clippings, letters, memos and other documents related to the NICAP.

Project Blue Book was one of several U.S. Air Force investigations into UFOs. Their documentation was transferred to the National Archives. The materials include home movies and are highlighted in the NARA blog The Unwritten Record. The FBI also collected information on this program which is available in the FBI Vault. Project Bluebook- 1947-1969.

In 1966 testimony was given by the Secretary of the Air Force, Harold Brown. Regarding UFO he stated: "the past 18 years of investigating unidentified flying objects have not identified any threat to our national security, or evidence of extraterrestrial vehicles” (Unidentified flying objects : hearing by Committee on Armed Forces of the House of Representatives, Eighty-ninth Congress, second session. April 5, 1966, United States. Congress. House. Committee on Armed Services. 5592).

In the 1950s the U.S. Air Force was working on developing a saucer-shaped aircraft (image at the top of this page). There is speculation that Project 1794  is the origin of the flying saucer sightings. Project 1794, Final Development Summary Report (d.1956)

Since their constituents were interested the subject of UFOs was repeatedly brought up in congress.

A hearing on July 29, 1968 called the Symposium on unidentified flying objects included six scientists who spoke to congress about UFOs. Professor J. Allan Hynek, in his opening statement says "The UFO problem has been with us now for many years. It would be difficult to find another subject which has claimed as much attention in the world press, in conversation of people of all walks f life, which has captured the imagination of so many over so long a period of time.”

Steven H. Schiff (Rep. New Mexico) made inquiries into UFO sightings in his state and received the July 1995 report from the General Accounting Office (GAO) on the Roswell Incident. This 26 page report shows where the GAO searched for documentation and the responses of various agencies. The report stated "After nearly 50 years, speculation continues on what crashed at Roswell. Some observers believe that the object was of extraterrestrial origin. In the July 1994 Report of Air Force Research Regarding the Roswell Incident, the Air Force did not dispute that something happened near Roswell, but reported that the most likely source of the wreckage was from a balloon-launched classified government project designed to determine the state of Soviet nuclear weapons research. The debate on what crashed at Roswell continues.”

In 1974, the FBI responded to Nebraska Senator Curtis that they were unable to investigate cattle mutilations due to a lack of jurisdiction- the cattle had not been moved across state lines. They provided a similar response to Colorado Senator Haskell (Animal Mutilations part 1).

In 1979 there were reports of mutilations on Indian Reservations in New Mexico that this fell within the FBI’s jurisdiction. An investigation in New Mexico resulted in Operation animal mutilation: report of the district attorney first judicial district, state of New Mexico Kenneth M. Rommel, 1981. In the 1980s theories on the possible culprits included Satanists, witches, pranksters, unknown government agencies, and extraterrestrial visitors (see part 5 of 5).

The FBI Vault has reports, correspondence, and news clippings.

The GAO report didn't have enough answers and readers wanted more. What crashed in the desert outside of Roswell, New Mexico in 1947? X-Files fans wanted to know! These volumes are seeped in Cold War intrigue, science experiments, and conspiracy!

The Roswell Report: Fact Versus Fiction in the New Mexico Desert (1995)

There was so much interest that the Library of Congress was compiling bibliographies of literature related to the issue. These sources are a great resource for those who would like to dive deeply into UFO lore.

UFO’s And Related Subjects: an annotated bibliography, compiled by Lynn Cato, Air Force Office of Scientific Research, 1969. The creation of this bibliography was under the direction of Dr. Edward Condon, of the University of Colorado.

Advanced Aerospace Threat Identification Program (AATIP) 2004-2012 was part of the Defense Intelligence Agency. AATIP did not issue any public reports but is considered the forerunner of the Unidentified Aerial Phenomenon Task Force. This task force is included in The Intelligence Authorization act for Fiscal Year 2021 (June 17, 2020)  where is was charged to “standardize collection and reporting on unidentified aerial phenomenon, any links they have to adversarial foreign governments, and the threat they pose to U.S. military assets and installations.” This task force was established on August 4, 2020.

Want more? The NSA has an extensive list of UFO related materials.

Welcome to the weird and wonderful world of government information

Have you ever seen a report or a pamphlet that made you smile? Or made you wonder what the heck was going on? This guide seeks to shine a light on these official oddities and treasures past and present.

Do you want to see more? Check out

You can suggest titles to include.

Using the language of Library of Congress disclaimers:

This blog does not represent official Government Documents Round Table (GODORT)  communications.

Links to external Internet sites on this GODORT web page do not constitute GODORT's endorsement of the content of their web sites or of their policies or products.

This blog may link to some content that may be harmful or difficult to view. Government publications span the history of the United States (and earlier), and it is libraries' charge to preserve and make available these historical records. As a result, some of the materials presented here may reflect outdated, biased, offensive, and possibly violent views and opinions. In addition, some of the materials may relate to violent or graphic events and are preserved for their historical significance.